In the classic tale, In the Heart of the Sea: The Tragedy of the Whaleship Essex by Nathaniel Philbrick, a group of sailors were “zagging” off the coast of South America in 1821 when they came across something ghastly.

They were in a whaling ship named the Dauphin, under the command of a captain named Zimri Coffin. One day on the horizon a small boat popped into view in the middle of the ocean. Here’s an account of what the Dauphin crew saw:

Under Coffin’s watchful eye, the helmsman brought the ship as close as possible to the derelict craft. Even though their momentum quickly swept them past it, the brief seconds during which the ship loomed over the open boat presented a sight that would stay with the crew the rest of their lives …

First they saw bone — human bones — littering the thwarts and floorboards, as if the whaleboat were the seagoing lair of a ferocious man-eating beast.

Then they saw the two men.

They were curled up in opposite ends of the boat, their skin covered with sores, their eyes bulging from the hollows of their skulls, their beards caked with salt and blood. They were sucking the marrow from the bones of their dead shipmates.

Quick! Think about how you read that. How did your actual physical surroundings feel as you pictured the salt-caked beards of the cannibal shipmates? Did someone in the room with you happen to cough while you read this? Do you recall any background noises outside? Any trucks or sirens?

Chances are your brain pulled you fully into the story. Your imagination filled in the scene, and your present circumstances and surroundings faded into the background of your consciousness. This is what Jonathan Gottschall, who shares this anecdote in his wonderful book The Storytelling Animal, calls “the witchery of story.” It’s what our brains have been biologically programmed to do.

We’re hardwired to be pulled into good stories. Think about the last time you watched a movie or read a book and were suddenly snapped back to reality by a loud noise in the room. You hadn’t realized that you’d lost most awareness of your surroundings. You didn’t notice when the line between reality and the story world inside your brain began to fade. That process — which we go through every night while we sleep — is a survival mechanism that helps us do a better job of storing information in our memory.

We also know the areas of your brain that light up when you hear or see a story: 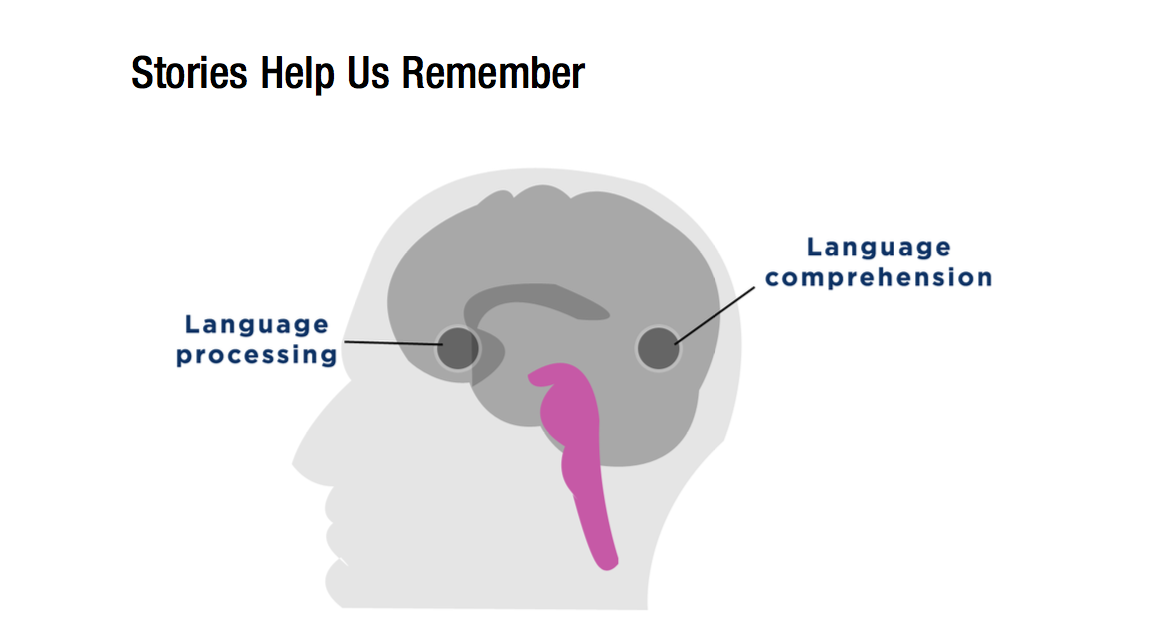 Something surprising happens when information comes from a story rather than just simple facts: More of our brains light up. When we hear a story, the neural activity increases fivefold, like a switchboard has suddenly illuminated the city of our mind.

Scientists have a saying: “Neurons that fire together, wire together.” When more of your brain is at work at a given point of time, the chances that your brain will remember the work it did increases exponentially.

Pretend, for example, you are in high school health class, and your teacher is giving a slideshow presentation. The first slide features a chart filled with stats on how many people die or are ruined every year from drug use. The teacher says, “Drugs are dangerous.”

In this moment, the areas of your brain responsible for language processing and comprehension will be working to absorb this information.

Now say the teacher takes a different approach. She puts up a slide with a photograph of a handsome teenager. “This is Johnny,” she says. “He was a good kid, but he had a lot of family problems that made it hard to be happy some days. He was quiet and got picked on a lot. So he started hanging out with some of the other picked on kids. One day, one of them offered him drugs. He started doing lots of drugs to make himself feel better. Ten years later, he looked like this — ” cut to a photograph of a sickly looking mid-20s young man with missing teeth. And then, the teacher gives the same message as the first: “Drugs are dangerous.”

During this lecture, all sorts of areas of your brain will be active. Areas that help you imagine what Johnny’s life is like. How he feels. How you might feel some of the same things.

Unsurprisingly, the second kind of presentation — the story — is a lot more memorable. Students who see that presentation are going to be more likely to think about Johnny next time someone offers them drugs. No matter what choice they make, they are more likely to remember the message that drugs are dangerous.

Do you see where we’re going? When we get information through stories, we engage more neurons. As a result, the story is wired into our memory much more reliably.

Imagine how this could change your next presentation.

A few years ago, scientists packed a bunch of people into a movie theater to see exactly how stories work on our brains. They put helmets on the participants’ heads, strapped on monitors to measure their heart rate and breathing, and taped perspiration trackers onto their bodies. The participants looked around nervously, laughed as they made small talk, and fiddled with their helmet straps.

And then a James Bond movie began.

As the movie played, the scientists closely monitored the audience’s physiological reaction. When James Bond found himself in stressful situations — like hanging from a cliff or fighting a bad guy — the audience’s pulses raced. They sweated. Their attention focused.

And something else interesting happened: At the same time, their brains synthesized a neurochemical called oxytocin.

Oxytocin sends us a signal that we should care about someone. In prehistoric times, this was useful for figuring out if a person that was approaching you was safe. Were they a friend, or were they going to club you on the head and steal your woolly mammoth steak? Through oxytocin, our brains helped us identify tribe members whom we should help survive. Because that would help us survive, too.

Our heart rates rise when James Bond is in danger because our brains have decided that he — this familiar character — is part of our tribe. We generate oxytocin when we see him, which makes us empathize with his story when we watch it. And, circularly, the more of his story we experience, the more oxytocin our brain secretes.

That means that we’re not just watching James Bond. We’re putting ourselves in his shoes. At the deepest physiological level, it means that we really care.

Oxytocin levels can actually predict how much empathy people will have for someone else.

Stories Bring Us Together

It’s hard to learn someone’s story and not feel connected to them. The oxytocin we get from stories helps us care, whether we like it or not.

This is basically the premise of the film The Breakfast Club. A group of misfits is forced to come together for detention one Saturday. After sitting miserably for a while — hating each other — they start to share stories about their personal lives, their parents, and, of course, their dreams. Over the course of the movie, they form a bond. When they leave detention and go back to their different worlds, they remain closer than before. They aren’t necessarily going to be best friends, but they now understand and respect one another. You can imagine them standing up for one another against a bully or becoming close friends after high school, when the artificial boundaries of their cliques start to disintegrate.

But even more interesting, we don’t even need to share our own stories to build a relationship with someone. Sharing almost any story makes a difference. In a 2011 research study in New Zealand published in the Journal of Teaching and Teacher Education, researchers put kids from different racial and economic backgrounds together for a series of story time activities. The scientists found that even when the kids weren’t sharing their own stories — when they were simply reading storybooks — they developed empathy for one another. They felt more connected. And as they grew up, they were less racist and classist than other kids.

This is why it makes sense that people still go on dates to the movies. On the surface, a movie is a terrible date. Both people experience the movie separately. It’s a parallel activity that doesn’t involve interacting with your date at all. And yet, it becomes a shared experience. Because your brain is wired to remember experiencing the movie’s story more deeply and vividly than other experiences, that story becomes subconsciously more meaningful to you — even if the movie was bad. And the fact that you and your date experienced the same story together actually brings you closer.

This is another way storytelling played a part in how we survived as a human species. When we were first building civilization, we grouped up in tribes. We had this magnificent brain, but we had to protect it against saber-toothed tigers and poisonous berries and thousands of other things that could kill us at any moment. We had to work together to survive. We had to hunt together, gather food together, make shelter together, and pass on lessons that we learned so that our descendants would survive, too.

But how could we do that, when we didn’t have a written language to record what we’d learned, how we’d survived? The answer, of course, was stories.

Evolutionary biologists say that the human brain developed the ability to tell stories — to imagine them and to dream them — around the same time as our ability to speak. Storytelling was an essential piece of the development and endurance of language.

And so we would gather as tribes at the end of our workday. We would take the wide world of stimuli from our time hunting and gathering and building. And we would package it all into stories — the stories that helped us remember and care.

Want to learn how you can add additional products and services to your present Business?

Want to learn how you can earn more from your present pipeline of business or investor clients?

Want to know where you can find all the forms you need and an easy submission platform?

Want an underwriting partner that help you from start to end, while guiding you and answering all your questions?

Want to wake up everyday knowing you are going to do more, help more people and earn more?

If you answered Yes to any of these questions, it’s time to Join the disruption at …..